No experience necessary! No preparation needed! Show up ready to play.

Callbacks will be held on Saturday, Feb 5th.

We rehearse and perform on Wednesday evenings. You must be available at this time in order to be a member of the troupe.

Please email us at nrbp@umass.edu with any questions.

Sexual Inhibition System (SIS): This is your sexual brake.

Sexual Excitation System (SES): This is the accelerator of your sexual response.

You’re not so sensitive to all the reasons not to be sexually aroused. You tend not to worry about your own sexual functioning, and body image issues don’t interfere too much with your sexuality. When you’re sexually engaged, your attention is not very distractible, and you aren’t inclined to describe yourself as “sexually shy.” Most circumstances can be sexual for you. You may find that your main challenge around sexual functioning is holding yourself back, reining yourself in. Staying aware of potential consequences can help with this.

You’re right in the middle. This means that whether your sexual brakes engage is largely dependent on context. Risky or novel situations, such as a new partner, might increase your concerns about your own sexual functioning, shyness, or distractability from sex. Contexts that easily arouse you are likely to be low risk and more familiar, and anytime your stress levels- including anxiety, overwhelm, and exhaustion- escalate, your brakes will reduce your interest in and response to sexual signals.

You’re pretty sensitive to all the reasons not to be sexually aroused. You need a setting of trust and relaxation in order to be aroused, and it’s best if you don’t feel rushed or pressured in any way. You might be easily distracted from sex. High SIS, regardless of SES is the most strongly correlated factor with sexual problems, so if this is you, pay close attention to the “sexy contexts” worksheets in “Come as you are.”

You’re right in the middle, so whether you’re sensitive to sexual stimuli probably depends on the context. In situations of high romance or eroticism, you tune in readily to sexual stimuli; in situations of low romance or eroticism, it may be pretty challenging to move your attention to sexual things. Recognize the role that context plays in your arousal and pleasure, and take steps to increase the sexiness of your life’s contexts.

You’re pretty sensitive to sexually relevant stimuli, maybe even to things most of us aren’t generally very sensitive to, like smell and taste. A fairly wide range of contexts can be sexual for you, and novelty may be really exciting. You may like having sex as a way to de-stress- higher SES is correlated with greater risk for sexual compulsivity, so you may want to pay attention to the ways you manage stress. Make sure you create lots of time and space for your partner; because you’re sensitive, you can derive intense satisfaction from your partner’s pleasure, so you’ll both benefit!

The Not Ready for Bedtime Players is available for internship credit! Want to learn more?

Do you want to be a part of the sexiest troupe on campus? Do you like sex? Do you like laughing? Do you like educating your peers about topics most people shy away from?

Auditions are being held February 10th.

You will receive audition material and a time slot after you have signed up.

Auditions will be on February 10th. We will contact you with details once you’ve submitted the application online. Application under the “AUDITIONS” TAB.

NRBP views sexual health as integral to the overall health and well being of all students.  We respect all genders, sexual orientations and sexual identities.  We support all people’s ability to make empowered choices that are safe, consensual and fit their cultures, values, and belief systems regarding sex and sexuality.  Our goal is to offer a show that is inclusive, accessible and affirming to all.

The Bedtime Players have been in existence since 1988 and were founded to provide education and dispel myths about HIV/AIDS. The Players are a program within the Center for Health Promotion. The Not Ready for Bedtime Players are recognized around campus and appreciated for the hard work that you put into educating and entertaining your peers. 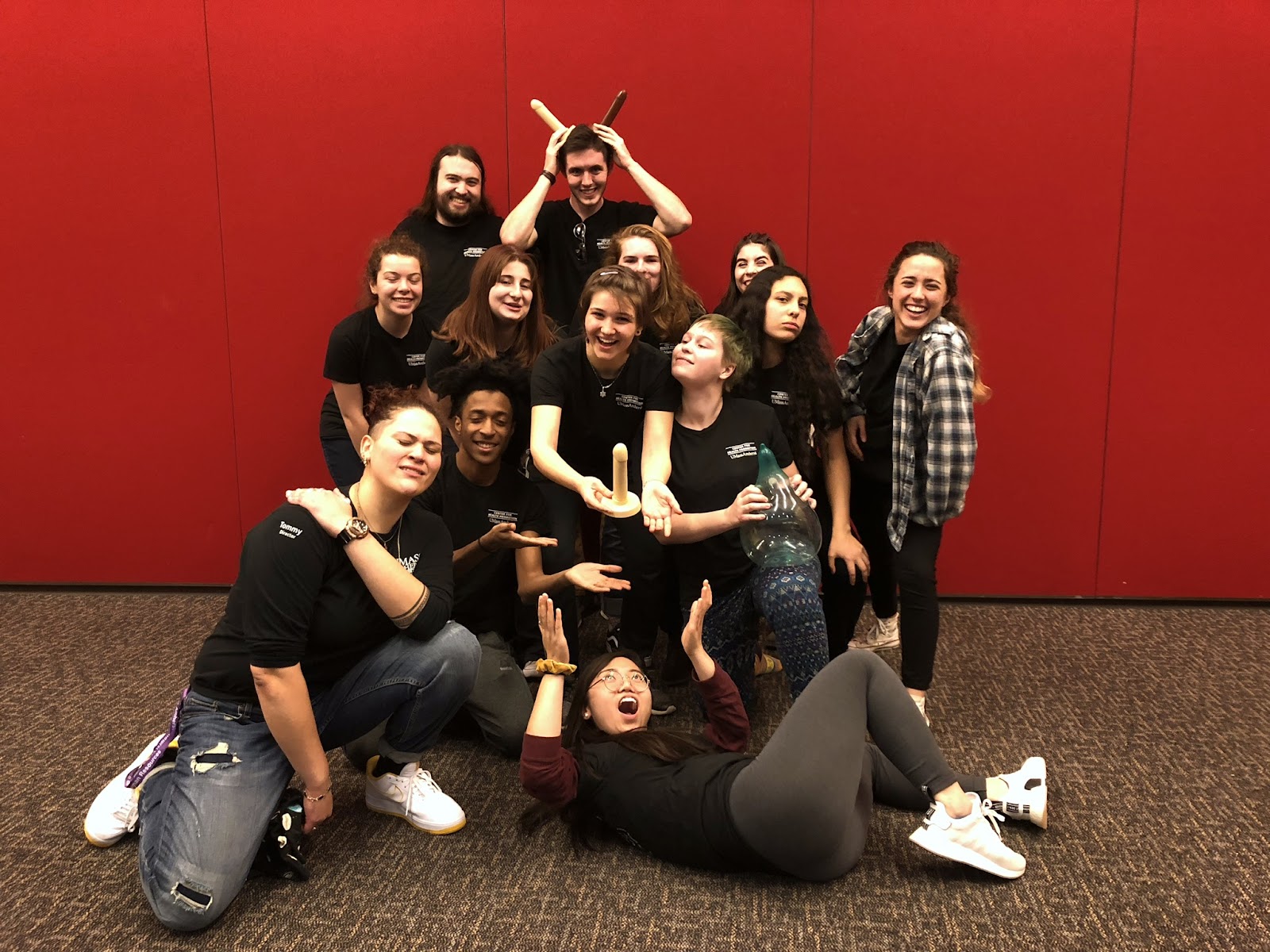 There is no experience required in theater, sex, peer education, comedy… you get the idea. All are welcome to audition!!

Most people’s understanding of biological sex is that it is related to both your chromosomes and your physical attributes (i.e. genitalia). The version of sex that most of us learn at a relatively young age is that if you have two X chromosomes you’re a woman and if you have one X and one Y chromosome, you’re a man.

However, this version of sex isn’t exactly right. There are XY people who have ovaries and give birth, and XX people who have ‘male’ bodies and functional sperm. People like these examples who don’t perfectly fit the XX/XY categories are commonly called intersex. Some intersex people have physical attributes that don’t match their chromosomal category, but others exist in other chromosomal categories completely. There are several genetic occurrences that can lead to people with different numbers of sex chromosomes. For example, there are people who are XXX, XXY, X, Y, XYY, as well as those with deletions or insertions of genes that can cause different combinations of genitalia and secondary sex characteristics (breasts, facial hair, etc.). There are also many hormonal cases, in which things like androgen insensitivity or estradiol failure can lead to a person being intersex.

The next question you might ask is “well, if there are all these exceptions, why do we only ever talk about male and female?” The answer has a lot to do with scientific research. For all their social ramifications, categories make scientific data much easier to analyze. So to try and categorize all these people in a way that makes sense, you, as a scientist, might plot them on a graph. So you look at all the ways people differ, including genetic variables, responses to hormones, secondary sex characteristics, etc., you give everything a number, and then you graph it.

You would get something called a bimodal distribution, which looks like this. The two big peaks are what we’d call “male” and “female,” but you can see the more purple areas which we would call “intersex.” Now, this image is just an example. In reality, there is not as much overlap, and the data would look different depending on which specific characteristics you focused on. But the idea is that there is a continuum of observed characteristics.

So when you’re trying to examine scientific data, it’s often helpful to group things so you can look for patterns or commonalities among members of a group, or differences between groups. Traditionally, when scientists looked at their bimodal distribution, they decided to split it down the middle and make two groups: male and female. And for a while, this worked.

But as we’ve learned more about hormones and brain signaling, and started paying more attention to the outliers where ‘standard’ things didn’t work, we’ve discovered that a binary model doesn’t work very well.

So let’s say you’re a scientist again, and you’re studying the effects of 2,3,7,8-Tetrachlorodibenzo-P-dioxin (TCDD) on animals, and you start to realize that the binary model of sex doesn’t predict your results very well. So you repeat your experiment, and again, the results are not predicted very well. You might start to think that your model is wrong. But the model kind of mostly predicts things, and it worked for years…

Eventually some brave, clever person pipes up and says “well, remember how we made that big graph, but then we just split it into two categories?” and you’re like “…yeah?” and they say “well, what if we used that data?”

At this point you groan, because complicated data is hard, but you sit down and do the complicated math shit and lo and behold, the model starts to work again. Where TCDD was randomly turning some females into males and vice versa, now you can see there’s a subgroup of what you’d call “female” that responds like the male.

It’s important to note here that these folks weren’t males that you mislabeled as females. They are functionally female and can do all the “female” things like gestate babies and such. They just respond to this one endocrine disruptor in a “male” way. So you just create two new categories, call them “Male2” and “Female2,” and keep going, happy that your data works. You’ve got four sexes now, but you don’t really have to tell anyone that, right?

Except then you have those XY people who can gestate babies, so you add “Intersex 1”, and the XX people with penises… and ovaries. Ok, fine, you add “Intersex 2,” because all these groups respond differently with signalling and brains when you get into the nitty gritty of it.

So the more you look and study, the more you learn, and we’re going to be able to sort out more of these fine differences between people. Depending on what we’re doing, we can choose whether or not to care. If a doctor is giving you aspirin, it probably doesn’t matter. But if they’re using a steroid on you or treating you for dioxin poisoning, that could be really important!

The important thing to remember is that we’re not inventing ‘new’ sexes. The distribution has always looked like this, we were just using really broad categories. But it’s gotten to the point where it inhibits our medicine and our scientific understanding of sex.

It’s also worth noting that I didn’t touch on transgender people. Intersex is not the same as transgender. You can be intersex without being transgender, and vice versa. You could even be both! Current estimates are that about 2% of the population is intersex, and we know that’s low, because many variations of intersex people are not “visibly” intersex.

The point of all this is that intersex is not a condition or a disease. It is a natural part of the bimodal distribution of sex characteristics. Science not only supports this, it also suggests that ignoring intersex people makes your conclusions wrong. Long story short, there is no scientifically valid reason to medically or culturally force people into the ‘peaks.’

The links below contain more detailed explanations about the embryology of sex organs, genetics and how it all relates to intersex people: